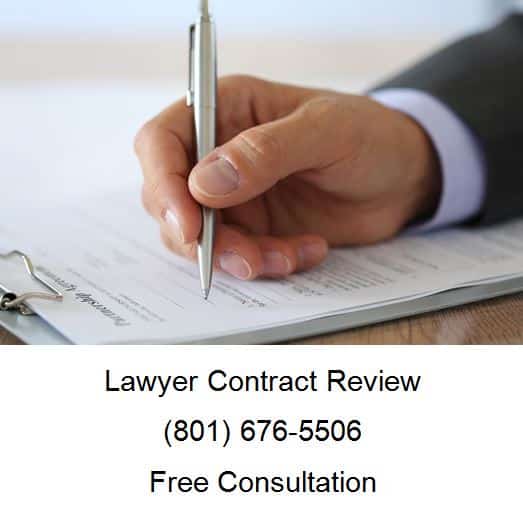 When any contract is presented to you for your signature and return, it is best to understand that once you sign the contract and return it, you are wholly and severally responsible for all the clauses in the contract, along with other signatories signing along with you.

Reneging on any clause of the contract by either parties would make them liable to face the brunt of the law and if called upon to pay the other parties compensation as per the laid down clauses in the contract.
Hence it would be prudent on your part to employ the professional services of a lawyer or attorney to have the contract reviewed prior to you signing on the dotted line.

It is in your best interests to ensure that under no circumstances should you sign a contract whatever it may be without referring it to a competent lawyer and obtaining the appropriate advice.

The lawyer would go through every detail in the contract and advice you of your rights and privileges as per the contract and would either ask you to go ahead and sign it or refer it back to the other party or parties and initiate the relevant changes pointed out by him.

Your lawyer or attorney would place your interests foremost and would try his utmost to ensure that signing the contract would not be detrimental to your interests.

Your lawyer would either tell you how much he would charge as professional fees for the review of the contract or you would have to request him as to what he would charge for his services.

Lawyer contract review fees would depend entirely on the type of contract and also some lawyers would charge according to the contents of the contract or even based on the value of the contract.

Such fees demanded by lawyers and attorneys have no precedents and would entirely depend how you would negotiate with the attorney or if you have a regular relationship with them the fees could vary.

Some lawyers could charge very high fees for their services hence if you are new to such matters it would be advisable to talk to friends, acquaintances and colleagues before going ahead with such an endeavor.

Having a lawyer go through the contract and then acting on his advice would not only hold you in good stead against any issues detrimental to your interests it would also provide you the advantage of having legal representation by the lawyers in a court of law, if either you are in default or any of the other parties are in infringement of any clauses of the contract.

Having a competent lawyer by your side would give you the confidence to face the law whatever the predicament you are in hence retaining one is in your best interests.

If you are here, you probably have a breach of contract matter you need help with, call Ascent Law for your free contract law consultation (801) 676-5506. We want to help you.

What are Entirety and Severability Provisions?

What Areas of Business Law do you Handle?

Specifications In A Contract